I’ve just been out for the day picking Usnea or Old Man’s Beard with the kids. It’s a great winter harvest because you can see “good Usnea trees” more easily when there’s no leaves, and when the water’s frozen you can access where it grows thick in the coldest, dampest, darkest places (like the wetlands). The also love waterfalls, creeks and the east sides of lakes, all places where there is high water content in the air. Unlike the Old Man’s Beard further south in the U.S. or from the west coast, in Ontario’s climate of wind, snow and ice storms the Usnea doesn’t grow too long without being torn. With smaller, shorter clumps it takes some time to pick a good amount. Carefully tugging the little bushes of hair from the folds of bark or twigs is a little like picking cotton. And like cotton it weighs next to nothing and you can compress and compress the Usnea in your hand as you pick before needing to put a handful into the basket. After a couple hours we filled one of my willow baskets. When I got it home and started to work with it, I realized there was also a type of Munkshood lichen growing on and in with the Usnea. The mixture, that I’ll blame on the kids, would be very time consuming to separate completely, so before I started I looked up medicinal uses and toxicity of Munkshood lichen (not the plant which is very toxic), and they were remarkably similar to Usnea. I took out a few of the bigger clump but left the little bits of Munkshood. I use Usnea for tea, tincture and oil. 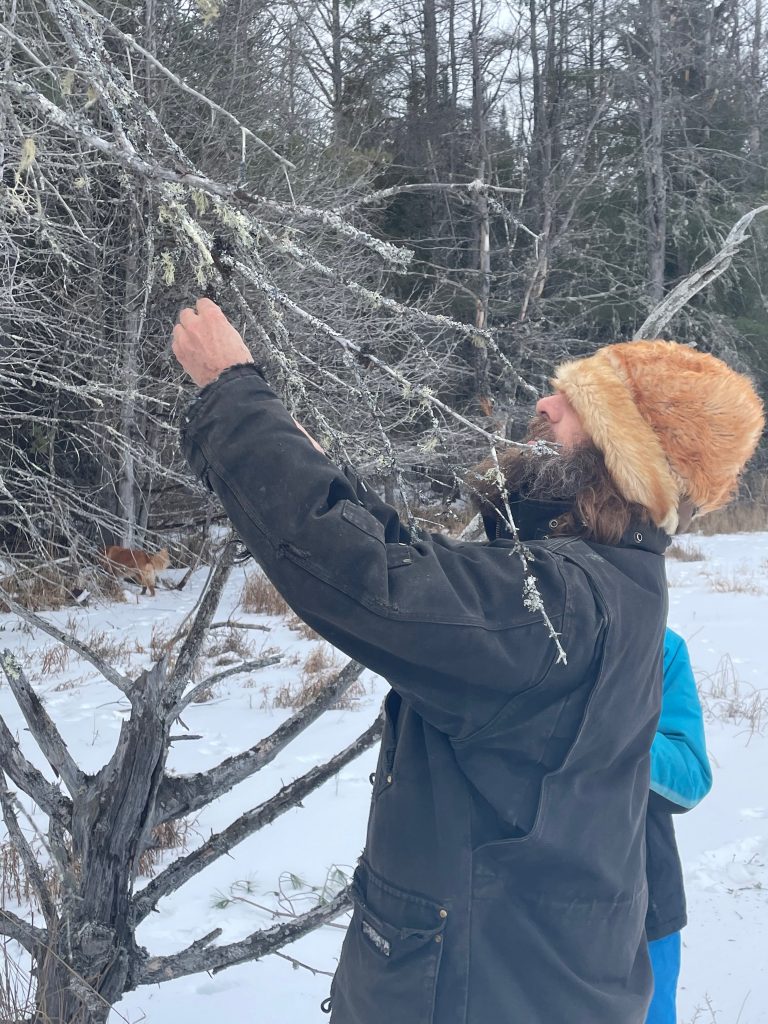 While Usnea is far from the only medicinal lichen it is one that herbalists more commonly use. There are about forty different kinds of Usnea world wide, including two from my area which are used medicinally. To identify Usnea (from its lookalikes Horse hair and Witch’s hair, which are also medicinal) gently pull one of the ‘hairs’ or strands apart and there should be an outer layer (which apparently has the highest antibiotic properties) and a core inner thread (which is said to have more immune-stimulating properties). Usnea is one of those universally used herbs. All across the Northern Hemisphere it has been used as a medicine for thousands of years. So the knowledge of this lichen trickles down to us from ancient China, Northern Europe and North America. It’s used topically as a oil, poultice or powder and internally as a tea, tincture, extract and I’m pretty sure I’ve inhaled this medicine as a steam/smoke off the grandfathers in the sweat lodge.

I have a lovely memory of making Usnea tincture with a group of local herbalists many years ago. The herb came from a fallen spruce, which is its favoured host. In a circle of thankfulness we gathered the herb in a big jar and then ceremonially poured the spirits over the mass of green until it was submerged. Then, like old witches speaking spells, we sat around the jar and told stories about Usnea. Many of the participants swore it was the only thing that kept them from getting sick every winter. Others said that it had cured pneumonia and others said that it had helped them with urinary tract infections as well as menstrual pain. After a couple of months we broke up the hoard of tincture for our individual use. I always felt that collectively made batch of Usnea was special. 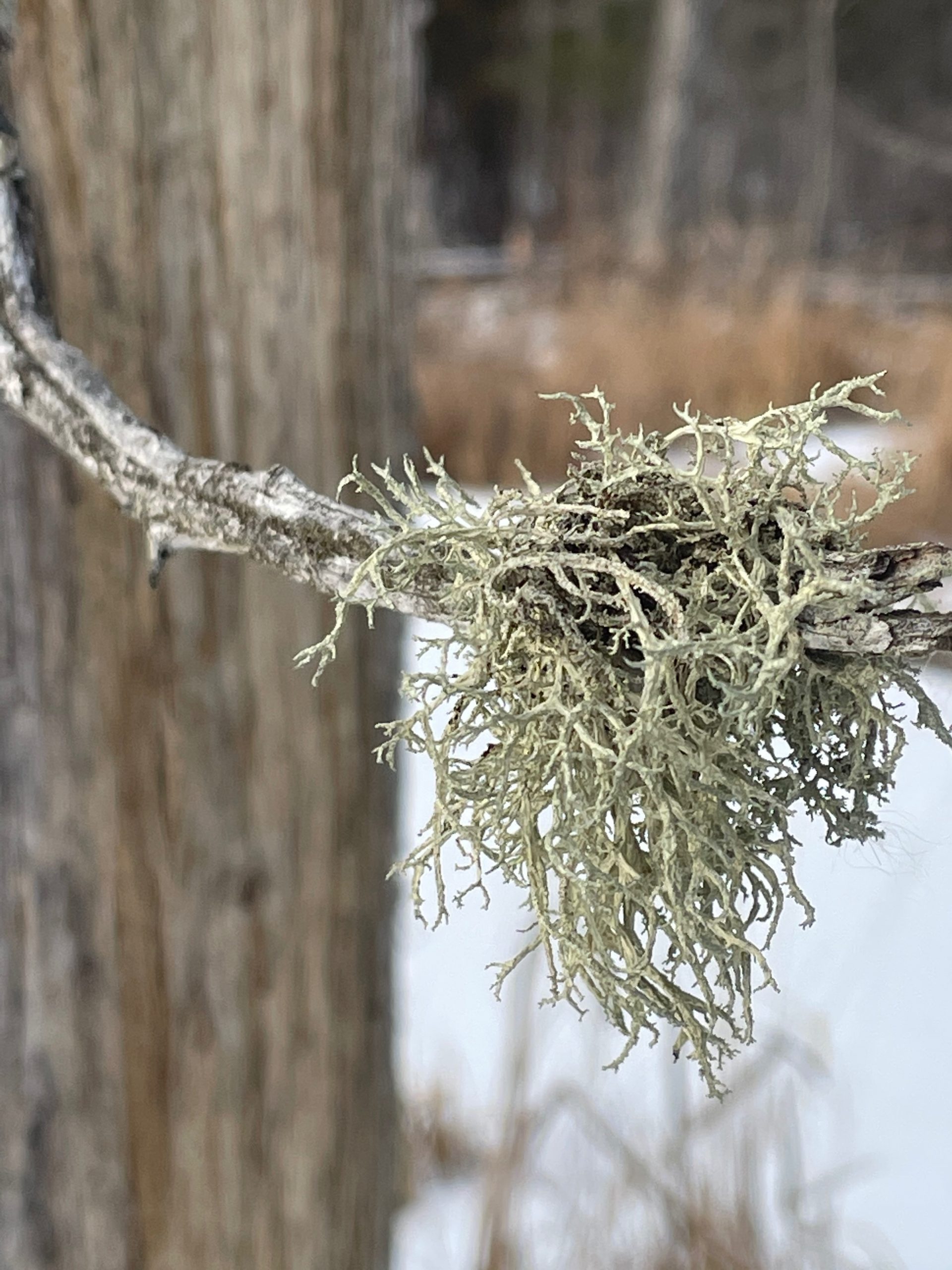 While they are green from chlorophyll, lichens are not technically a herb or a plant. They are both an algae and fungi. The fungus part stores the energy (polysaccharides) and makes the structure that holds the photosynthetic algae globules which collect energy from the sun to feed the whole organism. So, lichens are very self sufficient and self contained. They can survive more extremes in the environment (even outer space), than anything that’s green and alive, miraculously coming back to life when the harshness has passed. Unlike plants, lichens have no vascular system or roots and feed primarily from the air. Lichens are much older than flowering plants, so they don’t flower. They do something more like sporing. They can also spread by the little pieces that birds or animals, water or wind might carry to another spot.

While they don’t have roots, many lichens (especially rock lichens) have quite toxic acids to help them to grab into and even slowly digest the rock or surface that hosts them. Many lichens are edible, notably Rock Tripe and Caribou moss. I haven’t heard of any tradition of eating Usnea. As a food most lichens need multiple water soaks to leach out their acids which can be toxic to our liver, kidneys and spleen when taken in large amounts. As a food or food additive they are very much like seaweed. When made into a simple broth they create a jelly-like liquid. Like flax and other long chain molecules that do the slimy jelly thing, they are likely very nutritious and would be good as a binder for baking and a thickener for soups and sauces. Their food giving quality seems reasonable because both algae and fungi are very nurturing to the environment.

Biologically speaking they are the Mothers of the environment, birthing life from the inanimate elemental kingdom to the animate plant kingdom. In the north above the treeline, lichens like Caribou moss and Iceland moss are so essential to the plant and animal ecology they could be said to actually create the environment. And even where they don’t dominate the northern ecology, they were essential in the creation of its soils. Lichens start the process of making soil. They are the first colonists after glaciation because they easily spread and they don’t need anything but air and rock to grow. 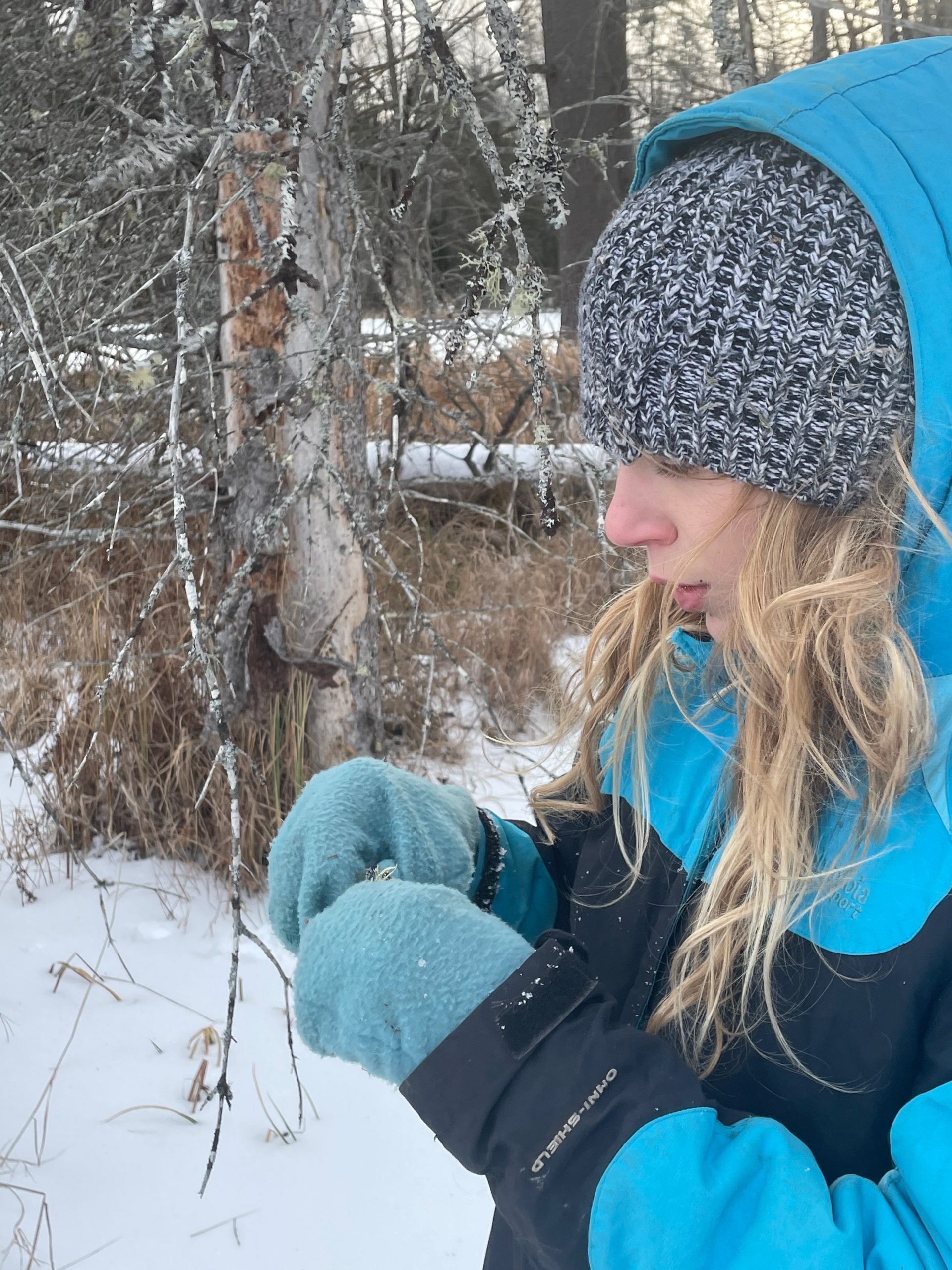 I’m speaking about the general environmental and biological qualities of this ‘herb’ because they directly relate to its character, its strengths and uses. Old man’s beard is also referred to as “the Lungs of the Woods”. Now this is truly a telling name, which could only make sense when you understand the medicinal use. Most universally it is used for congestion and cool damp conditions in the lungs. It can also cool ‘hot’ conditions internally and as a poultice or oil externally. Usnea is protective and regenerative for the lungs. It has both an ascorbic drying quality and a gentle soothing and nourishing character. Usnea embodies the energies of strength and souverinty as we can see in the immune boosting and detoxifying qualities. As well as grace and flow helping blockages and trauma related rigidity in the body.

As is often the case with things growing in cool damp environments, they are able to pass on the medicine which has protected them from the pathogens and other harsh environmental factors of that place for countless millennia. Usnea is known to inhibit the growth of Bacteria, Septic, Viruses, fungi and mold all of which thrive in moist dark places. I think something also needs to be said about Usnea’s tree energy and connection to the standing people. While mushrooms that grow on wood clearly draw from the properties of the tree and condense them, like Chaga or Reishi, Usnea is physically not connected in that ‘parasitic’ way to the tree, but none-the-less does hold the tree’s energy. It’s like the old trees are wearing the lichens proudly like an elder with long white hair that speaks of life’s trials and purification. I have also thought that like the lungs, lichens are an early warning system connected to the ‘air’ element.

Our lungs are our first line of defence in many ways. They are the primary surface on our body where we are directly interacting with the outside world, and with all the pathogens it contains. So Usnea, by increasing the cleansing function and regenerative health of the lungs, is extremely good for what we call our “immune system”. Which isn’t a system, like the nervous or circulatory systems, so much as a diverse group of organs and cells that function to keep our body sovereign from harmful invaders. The immune ’system’ also helps keep us healthy by mediating a balance among the diverse cultures that inhabit our body.

While I have generally used this herb in its antibiotic and lung healing capacity, I understand it is also commonly used traditionally as a Kidney tonic. Also the above mentioned acid Usnea generate is usnic acid. This acid and many related compounds have many clinical uses in medicine and industry, such as a preservative. I’m not much for the science end of things but Usnea has been heavily researched. In Robert Rogers’ book, The Fungal Pharmacy he has compiled much of the scientific and ethnobotanical research.

Here is a brief summary. Usnea has been traditionally used for an incredible number ailments of all kinds, respiratory expectorant, tuberculosis, colds, flu, coughs, leprosy, for external infection, ulceration, urinary infection, uterine problems, menstrual pain, to stop nose or wound bleeding, as a dressing for wounds, for burns, used for giardiasis and candidiasis, for ringworm, athletes foot and mastitis, used as a bitter for stomach ailments, to increase appetite and as a weight loss aid, also used for menstrual padding and diapers, as a sunscreen, for perfume and soap, as a blue dye for textiles and for tanning hides. Scientific studies have proved Usnea to be antiseptic, anti-fungal and antibiotic (even against virulent forms of Strep’ and Staph’), anti-inflammatory, anti-tumor, antispasmodic, antiviral and anti-protozoic, antioxidant, analgesic, diuretic, astringent, vasodilator.

While Usnea is not popular or widely talked about I believe it to be one of the pantheon of great healers we should all know and look too in times of need.

Check out our spruce tip outfits! Buckets tied on

Steven in his happy place, prepping gardens for th