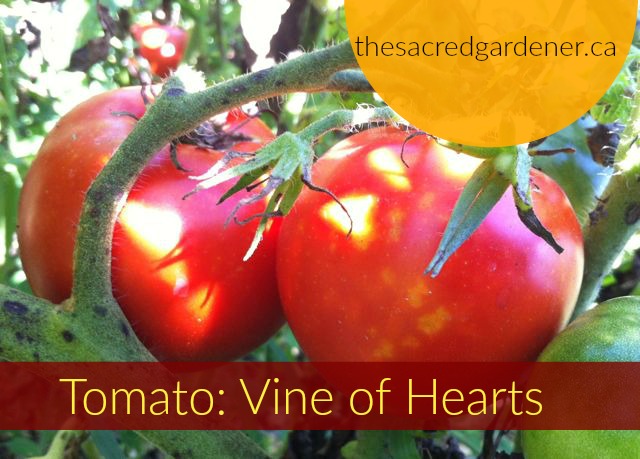 In the last golden days of summer we are living in the garden of Eden. This summer was the hottest driest summer on record, yet miraculously our crops were bountiful. The wild plants suffered but were still able to give us our wildcrafting quota of herbs for The Algonquin Tea Company, Gooseberries for jam, Wild Plum for mead, and Choke Cherries for jelly, all sweetened with dense caramel drought-year honey from our hives.

Bushels and bushels of fruit, herbs and vegetables come into our home each day to keep us and friends well for the winter. The crocks, larder and root cellar are filling up once again. We’re feeding open hungry mouths and big empty bellies calling back to us from the dark months ahead.

I’ve been preserving food for thirty-seven years. In that time my techniques have changed quite a bit. Since a visit in 2008 from the esteemed Sandor Katz, author of our fermentation bible “wild fermentation”, Megan and I do more lacto-fermentation then any other storage method. But there are still many other preservation skills, honed over decades, which are also essential for our wellbeing. 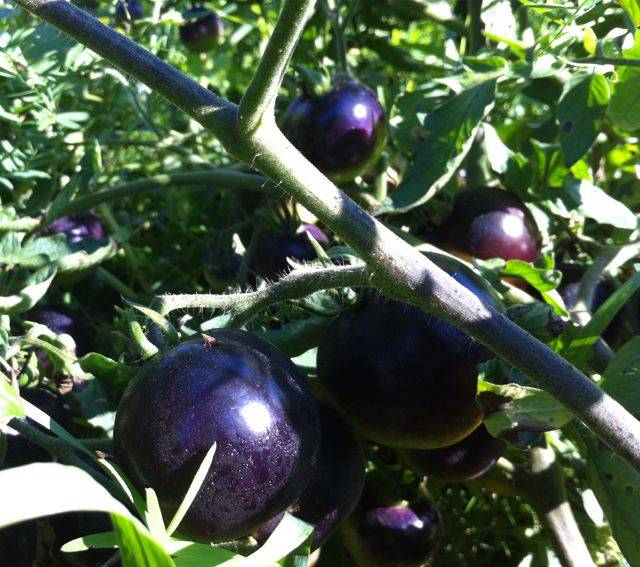 For example, while we have fermented, frozen and dried tomatoes, there’s just something about tomato sauce and paste that I can’t do without.

Tomatoes are the heart of the garden. I grow seven strains. Three of them (Amish, Roma and Banana) are paste tomatoes. These magic relations have fed our ancestors throughout the year and kept them in good health for at least a few thousand years on Turtle Island, and four-hundred or so in Europe. Each and every year over those thousands of years, each tomato species has been carefully grown, harvested and carried through to the next season. Think about this gift. In a thousand years there may have been as few as fifty generations of life long keepers for each seed. I am part of this living legacy and have been given the privilege of seeing the deeper mystery of Tomato, where the first seeds came from. Thousands of years ago in a time of great famine and hardship a mythical woman married into the nightshade family, somewhere in Central America. And from their union the tomato was born and given to the first people. As the last carrier in that long line I bow down to this being who gave completely of herself, as the progenitor of this miraculous food and medicine. I know that the responsibility of that first union and thousands of years spent in good relation with her family, rests on my shoulders now, passed down to me from all those in the line who have kept her before me. My responsibility is to keep her well, teach about her and pass her on when the time is right. To someone willing to marry her, to take care and cherish her for as long as they are able.

Sound familiar? It isn’t called husbandry for no reason. In our not too distant past this marriage wasn’t a mystery, it was obvious to everyone who grew her. Celebrations of kinship with those beings which feed us hold in them many things of great importance. Maybe the problem these days isn’t with marriage, but that people just need more practice; to start with plants and animals and work their way up to marrying and caring for another human being.

Each year, at the end of summer our ancient bond is re-consummated when we harvest our beloved tomatoes, save her seed and prepare her for consumption; for our union. And each spring our vows are renewed when she is laid down in the Earth to die, and grow once again into the powerful vine of heart; vine of life. If we listen and follow this lowly vine she can bring us all the way back into the Garden of Eden, where we tend to and are surrounded by lusciousness and fecundity Herself. 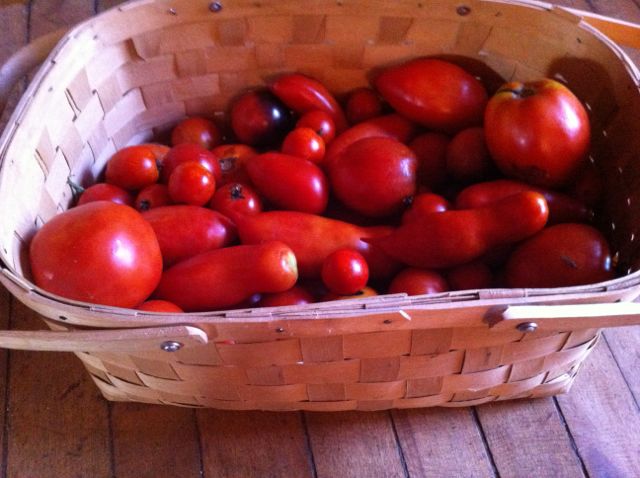 When tomatoes were first introduced into Europe, they (and potatoes) were grown in medicine gardens and were used exclusively for medicine. It was a hundred years before people were consuming them regularly as food. If we look at a tomato, with the doctrine of signature in mind, and imagine what part of the body they’d be good for I think most people would say the heart. When we look at the inside of a tomato after the watery part is taken out it also resembles the inner structure of lungs. Indigenous people likely instructed early European explorers in the use of the fruit. So by the 1600s in Europe it was common knowledge that tomatoes were good for lung and heart disease. As with many folk remedies these uses for the fruit has more recently been scientifically proven. Tomatoes are crazy high in Lycopene, a chemical that is proven to help with immune function, heart disease, asthma, cataracts, as well as lung, stomach, pancreas and other organ cancers.

My tomato relations have not just taught me what she likes, how to grow her in a good way, but also how to prepare her. We dry her, make Tomato paste, ketchup, sauce and salsa. The paste and ketchup take a while to boil down but once made can be stored without refrigeration, in a cool dark place (earth temperature) in a crock or jar with the top of the paste covered in oil (like pesto). We make ketchup the same way as paste, but with spices (& herbs like celery, nettle and astragalus), honey and vinegar added. We even put it in a ketchup bottle to fool our kids. And of course, we also ‘can-up‘ these magical beauties. Picked red is lovely but Amish and the others can also be picked green in mid-September before the frost and then spread out indoors to sit (at room temperature or cooler but not damp) for two, three or even four months before turning red and ripe. So, we have waves of canning-up sauce every week or two, over the wood stove, up until the new year! In the end we usually can up about 60 litres, eating as we go. This is enough for our family, guests and workshop participants for the year.

After many years of hot-packing tomatoes, (which you can get away with because of their acidity) we found we still lost about 10% (hot packing is heating the jars, pouring in the hot tomato sauce and boiling the lids. As it cools, it creates a seal). Then a few years back we found a big pressure canner and the amount of bad jars that go through the pressurized water bath is almost nil. It’s almost always worth the extra effort to store your food carefully as possible. There’s nothing like spending a summer watering and tending a lovely crop, only to loose her in storage.

We also dry Tomatoes. Mostly, we use a hearty smaller plum size tomatoes (Glacier). I bow down to this one for many reasons. Not the least of which that she is by far the earliest to set fruit in our northern climate. I start them in April and by July we have tomatoes, a good month before anyone we know. 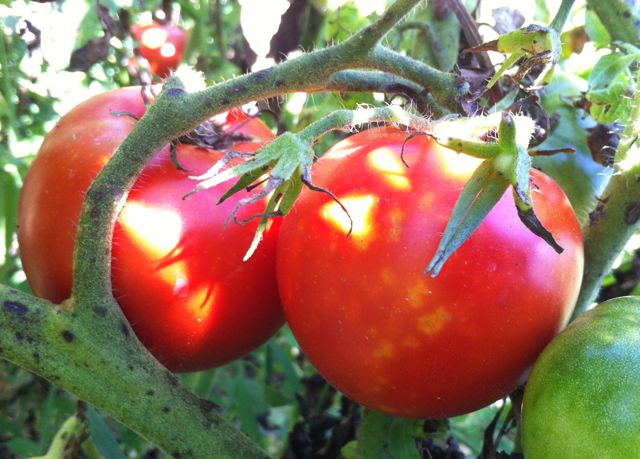 To dry tomatoes or any fruit, we use a dehydrator early in the fall, then a screen over the wood stove later when the fires going more regularly. In a pinch, you can use an oven on the lowest setting with the door cracked. For energy efficiency it’s a good idea to fill the oven because it will have to be on for at least twenty four hours. You can fit much more fruit by hanging the fruit over the ribs of the oven rack vertically rather then putting them across. Its best if you can use the sun or a wood stove for your heat source, then there is 0 energy used in the drying process. To prepare the fruit for drying we prick the skin all around every half-inch (so moisture can leave the skin side of the fruit), then cut them in half, and lightly salt them (tomatoes only). Air circulation is also essential. Once they are good and dry (no soft spots but still a bit flexible like leather), store them in a glass jar because in a damp climate they will re-absorb moisture from the atmosphere.

In our cans of tomatoes, ferments and fruit leathers lives a little bit of the original garden, keeping our body and soul alive until next year when we see her beloved face again.