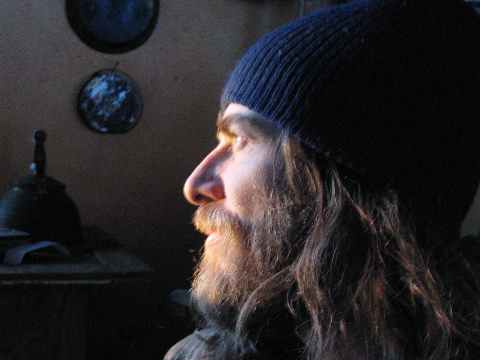 It has been said or imagined that for our ancestors, all of life was ceremonial. While that may be true in the some idealistic sense, in the moment to moment reality our days are not all ceremony and never were. In the sense that we’re here dancing through each moment with divinity, yes, but there can’t be continual ceremony, it doesn’t work that way. It’s the long slow stretches of time and enduring the lean times that is part of what gives ‘ceremonial time’ its potency. During our days and years there are poignant moments in the flow of time. In this river of time the ceremonial points are the rapids and waterfalls, or the sharp turns of direction. And we celebrate the times when we are filled with returning salmon.

As there are ceremonies that mark the transitions and major times in the year, so too are there ceremonial points in our days.

As the sun rises each day and we are delivered from the dark cold night by grandfather sun, and the light, colour and heat come back to the land. The dawn and sunrise is an truly miraculous ceremonial time when the world is awakened and our hearts with it. And like the sun dawning, when we first wake and rise from the underworld, this is a profound moment that everyone has, every day. In that moment we come back into our bodies with our dreams and our night-passage still rolling through our heads. That’s big. But most of us do not wake up with the sun; breezing by our own awakening in our rush to get to…what? The sunset and darkening of the land and surrendering to sleep are equally profound and powerful times. In surrendering to the darkness and unconsciousness we are surrendering to the Gods and Goddesses of the unseen world that underlie this world. And we do this everyday without ever real even thinking about it. Do these times not call for a moment of reflection and prayer?

The next event in most people’s day after getting up is relieving one’s self. Many people think of having to go the the bathroom as almost an inconvenience, but this too is a profound moment we can ritually experience throughout the day. When we relieve ourselves of our physical waste we can also relieve ourselves of our psychic waste. They are connected. Anxieties, anger or resentment, or whatever ‘negative’ thoughts and emotions are consuming you, can be pissed or shit out when done prayerfully and consciously.

Next for most folks is cleansing, brushing our teeth, washing our face or our bodies. These are also very profound actions that can be invested in ritually. Many people obsessively bath and wash themselves, unconscious that they are performing a ritual act of cleaning, hoping to rid themselves of something. If we do it more consciously, blessing the water and asking for her to clean you this is an amazingly effective ritual. Water is one of the elementals, and as such truly magic. Also, washing and hanging out our clothes was traditionally a ritual way of cleaning our negative energies and we can follow that old lead.

And then there is of course eating. Eating can truly be a ‘consummation’ of life and spirit. When we are ‘consuming’ something, we do it so that we may live, but to do that something else must die. What could be more profound than that. And it is so important that we are not just thankful for this ‘food’, but that we bow down to the specific spirits that have given themselves for us.

Another thing we start our day with and tend to take for granted, but which ancient cultures tended to with great care is greeting people when meeting and or even just seeing and passing another human. When we meet someone, or leave someone, these are once again very poignant moments. When we leave each other, every time, it may be the last time you see one another. When we meet one another and we are able to look into the eyes of another soul who is here, incarnate, in the same place and at the same time as ourselves it is really a miracle. In grasping this ceremonial moment many cultures are moved to bless each other. As in Shalom or As-salamu alaykum. In the western world we have forgotten this and made more formal greetings to reinforce status, and then those were reduced to “Howdy”. Which if you stretch out you can hear is short for “how do you do”. And now we’re down to the hollowed out version of Hello or hi. Or more likely ‘the stranger’ who has been honoured throughout time, as a returning soul is now ignored. And as we ignore another we ignore our own soul.

And last but not least there is making love. This joining is so profound it has often been associated with death by poets and sages. And indeed in the joining of two souls a doorway is opened to the other side and a part of us dies in the holy ecstasy that comes from the opening. However, the profound ceremony of making love can be greatly diminished, as it has in our present culture. Like fast food this sacred form of consummation becomes just ‘getting off’. We spill the finest wine carelessly over and over and then like drunkards in the morning we wonder why we feel so empty and filled with remorse. Sex has crossed from a being a act of giving to an act of taking. What was and can be a ceremonial act, in which we join with Gods and Goddesses channeling the creative spirit of the land, has changed to the greedy taking of pleasure. As though it was our secret drug and not a gift of spirit.

It feels like I harp on about being surrounded by the sacred, over and over. But my prayer and hope in doing this is to wake folks up to the only path we have left. An ancient but seldom used sacred road which marries the profound to the mundane. This is the only path that leads to a future worth living. The path to reclaiming our souls and redeeming our relations with the Earth and our ancestors. When our actions and philosophy is devoid of a spiritual meaning, or our spiritual life is removed from the rest of our lives as a ‘practice’, then we have been split in two. When this happens we get stuck with the accountant whose been left in charge, while our souls watch distantly from the forest.

Check out our spruce tip outfits! Buckets tied on

Steven in his happy place, prepping gardens for th