Sweetgale is the wise old grandmother. She’s one of the weavers who made this land. Her roots hold the land close like a basket, like a nest, not giving Earth away to the sweeping fingers of the water along shorelines. Her sweet comforting aroma invites us in to sleep safely on her shores. 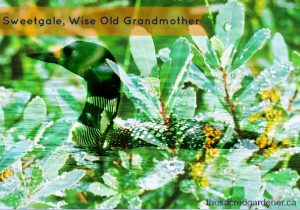 I met Her long ago in my youth when I first began to paddle the lakes of Muskoka, Algonquin and Georgian Bay. I always loved Her look and smell. She began to sing to me in my dreams and so I picked her and began to drink her all day. Like a key She opened a door to me into the heart of this land marbled with rivers and lakes. At night and during afternoon naps I dreamed with Her. She woke me up in my dreams, which became vivid and lucid. During the day another wave of magic enveloped me, her warm spicy perfume protected me from the mosquitoes!

We humans have always drunk Her, so my ancestors and the spirits of the land explained many things about Her. Like all plants and animals She has a spirit twin. The totemic animal of Sweetgale is the loon. Loon is one of the most powerful birds. He remains unchanged from millions of years before all the other birds, and millions more from before humans. Loon nests safely in the tangled weave of sprawling Sweetgale stocks, reaching from the plant tips (that we pick for tea) to the shore. The scent of their hatchlings hidden by Sweetgale’s perfume. Sweetgale and her totemic relation both span all three dimensions, Water-Earth-Air. They balance and hold in place the boundaries between these dimensions. The lucidness She gifts us within our dreams comes from this mastery over the three realms.

What plants do in the ecology they do for us internally. Sweetgale helps the water flow clear (diuretic) and purifies it (detoxification), while building the strength of the shoreline. She holds the nutritive silt that builds up along the shoreline, so for us She draws out toxins and helps absorb food from our blood stream more efficiently. She strengthens and cleanses our organs. Sweetgale grows in thick hedges along the shores and so has developed anti fungal, antibiotic and anti-parasitic qualities to protect herself, as well as being able to repel mosquitoes. Mosquitoes and other pathogens feed on shoreline plants long before they suck blood, only needing blood to reproduce.

When we lie down with others and sleep, we can dream together with Her help. Our consciousness, like the Sweetgale roots are all interlaced underground and underwater. We are one in the collective dream realm. While our dreams with Her may be more colourful, Her teachings that come to us are black and white, like Loon’s markings. Loon’s eye, orange like the setting sun, purifies us when we are in the dreamtime. Like Loon’s masterful flying underwater, when we drink Sweetgale we have lucidity, we have the ability to move whatever direction we will in our dreams.

Loon, like her spirit twin Sweetgale calls us back to our most ancient self, to our ancestors and to the ancient Earth.

In any weather Sweetgale’s energy is always bright and up, so she enlivens our body (tonic and stimulant).

In old Europe Sweetgale was known from time immemorial to be an essential ingredient for beer making. Beer started like many of our fermented foods, by ‘happy accident’;  letting a sweet nourishing herb/grain “tea” sit for many days in a warm place.  Then, a wild joyous healing “spirit” entered the drink and transformed it into a magic nourishing elixir. It was understood by everyone for millennia that beer was both food and medicine. The pleasant side effects, if drank in moderation, were from the spirits that entered it when brewing, that entered you when you drank it. One of the other qualities Sweetgale gave beer was its psychoactive and stimulating qualities. So instead of just getting tired when you drink you got more energized. The infused Sweetgale increases your libido unlike alcohol which is depressive to your system. This is one of the reasons the Church banned it in the eleventh century and said only hops could be used as a bitter in beers, which has sedative qualities. The ban wasn’t just about controlling peoples emotions,  but also the economy. Sweetgale or Bog Myrtle as She was called in Europe is wild and “free for the people” whereas the monastic farms had a near monopoly over hop production. This edict from the church was fought for two hundred years.

As well as acting like a bitter, Sweetgale helped inoculate the tea brew through beneficial yeasts that cover the plant leaves. Sweetgale also helped preserve the beer through its anti-mold, anti-bacterial and anti- fungal properties. These are the same qualities that make Sweetgale tea good for our digestive system and skin. Like all “bitters” Sweetgale is good for the liver and our immunity.

Before using any herbs in the Algonquin Tea Company blends, I journeyed with the plants to commune with them to see if it was ok, to see if they were into bringing their medicine to the humans. In many cases such as with Sweetgale it would be the first time in centuries that the plant was brought into the consciousness of humans. When we brought Sweetgale onto the market no one was using it medicinally, for tea or for brewing. Since we bridged the ancient relationship many uses (both related and unrelated to Algonquin Tea) have come up. Now people are using it for everything from beer to treating MS and cancer.

Before Kim (co-owner of Algonquin Tea C0.) and I went harvesting I journeyed with the plant and got Her approval. I had told Kim about the loons and some of what I knew about Gale, (as we affectionately call Her). When we went out the first time we were literally surrounded by singing Loons. (This is the only time this ever happened to me in thirty some years of canoeing). They seemed to be overjoyed that the reunion was going to happen. Our hearts swelled and tears flowed in gratefulness.

Another notable moment and one of the few times in my life I’ve seen and was standing in “the end of the rainbow” was when we were picking Sweetgale. Jason, who was our first real apprentice was in the blue part and I was in the red as we stood picking in the biggest Sweetgale patch twenty feet apart. We giggled with the strangeness of it.

I have told many skeptics over the years about Her ability to help us consciously dream and dream with someone else in the same bed. It is satisfying to blow people’s minds, because once you’ve experienced something you can no longer deny it.

We were out walking on the pond, near dusk. Fina

We are grateful for such beautiful people that com

SEEDING A FUTURE OF BEAUTY, FECUNDITY AND HEALING