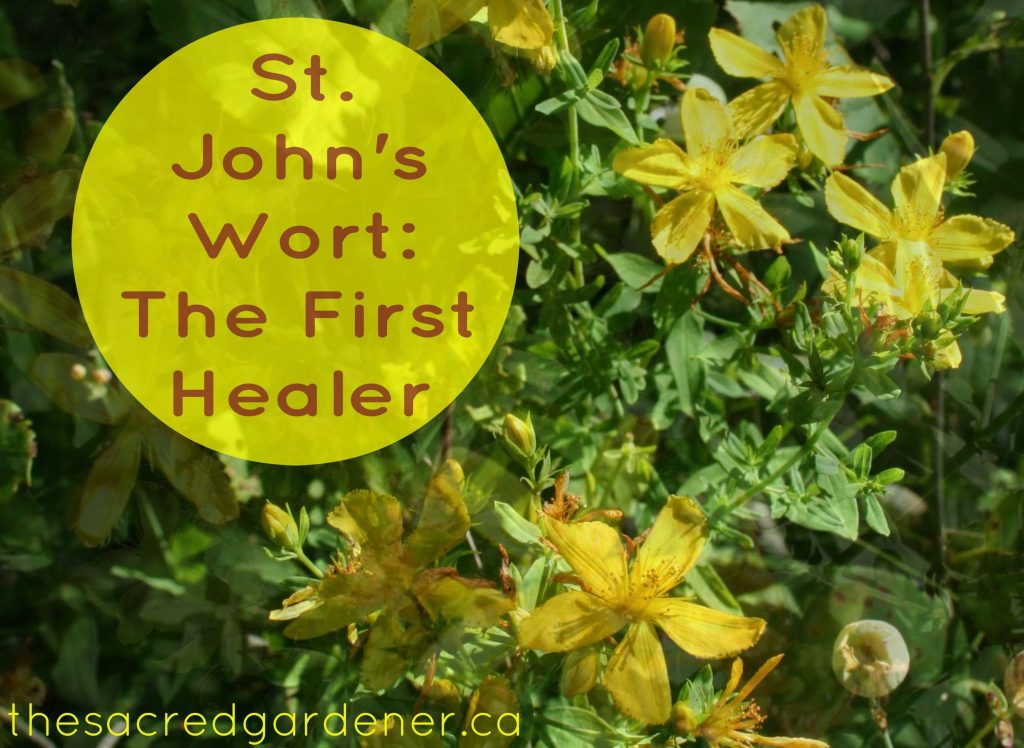 I’ve been wildcrafting herbs for thirty-five years, and I still learn (or re-learn) many things every year. I seldom have alone time these busy summer days, and when I do it’s usually when I go to wildcraft a specific herb. As you may have experienced yourself, when we are alone out in nature, we often have the deepest, clearest lessons come to us.

St. John’s is a very special harvest, both in terms of His importance in the herbal pantheon, and in His flowering ceremonial expression of solstice, a significant alignment and time for the Earth and Sun.

There are many types of St. John’s Wort, both North American and European, and though they can be used interchangeably, it is the European variety that is commonly used. In Europe,  St. John’s Wort (Wort-an object that embodies spirit)  comes into flower and is harvested at the summer solstice, (in the Christian mythology six months before the birth of Christ). Here in Central Ontario, St. John’s comes into flower a week or so later.

St. John’s has a very short harvest window and this was understood well in the middle ages. So much so, that they had a St. John’s day when this specific herb was harvested by everyone, to be dried and stored for the year’s use. Summer solstice has also long been a day for great celebration and healing. Before the Christian era, St. John’s or “Wound Wort” was associated with The Summer King, the Green Man, a God of fecundity born in the heart of the summer. Visits from Gods or Goddesses tend to be brief and potent. So, if you want to have the healing power of the Gods, you must move at the right time to receive St. John’s during the last week of June.

The ancient Greeks, aptly named this plant Hypericum, after Hypernicus, the father of western medicine and the first “doctor”. This was because, for herbalists, then as is now, St. John’s is the first healer to call on, for many ailments. Like the sun, He heals flesh and nerves, and purifies decay within the body. This plant was so valued as a wound healer, that battles were fought at a time and in relation to the location of flowering Hypericum. The power to dictate when and where battles would take place might seem far-fetched, but at that time it might be the difference between losing half the men in the village versus only losing a few. Death from war was not as glorious as its Hollywood portrayal or as we might imagine; being cut down in an open field and dying quickly. Most people died long after the battle, suffering in pain from infection and septic. For those people, St. John’s was undeniably a miraculous blessing and cure.

St. John’s Wort is not only a majestic healer and powerful alchemist, but is a spiritual activist. Like this plant’s namesake Saint John the Baptist, He’s the first to stand up, to spread the word of the holy, the miraculous, the healing power of the Earth and Sun.

The power of the sun, seen in the bright yellow, five petalled flower, can also bring light to those who are under the cloud of depression or Seasonal Affective Disorder (SAD). Because of this, St. John’s has often been referred to by the media as the “Herbal Prozac”. As the ancients knew, and modern studies are showing, our brains and our guts are linked in many ways. So it’s not surprising that St. John’s Wort also helps harmonize our digestive track.

In other folklore, the cross of the branching structure represents the cross of Christ. I see the stalks as the hard-tight nerves that St. John’s can treat. The holes in the leaves have always been seen as one of St. John’s medicinal signatures. The openings or perforations in the leaf equate to His ability to heal cuts and holes in the body (and soul). For me, the perforated leaves are like a veil between dimensions, and the holes are portals from which the procreative spirit of life can flow into our world, or into our tea or tincture, any time of the year.

A couple of days ago, the St. John’s Wort was perfect for harvesting. The harvest day for St. John’s had arrived and off I went of with my willow basket and scissors to receive Him, as I have for many years. St. John’s sometimes mysteriously arrives or vanishes from an area, but generally if He is needed and honoured He stays in certain ranges on the land for decades. I did my prayer to court His spirit before I went hunting for Him. As I walked through the woods back to the area where I thought He was growing I thought of how thankful I was for Him, how He had helped me, and so many others through me. After a little walk I came out of the forest into the open field and right there in front of me were a hundred or so plants. Some were a little too far along and some not far enough along, so in the end I probably only harvested about 25%. You can sustainably harvest about 50% of mature flowering St. John’s Wort.

After harvesting for a while, I got to the end of the patch I’d thinned out. I was still in harvest-mode, with scissors in hand I started wandering forward looking for more, heading to where another sizeable patch that had been at the back of the field, not far from the first patch. But, in the rush of harvesting I’d slipped from the sacred place of being a hunter, and courting Him with prayers as I searched. I walked and walked and got to the end of the field and beyond without seeing the patch. This patch had always been at the trailside on a little hill, impossible to miss. St. John’s Wort is two feet tall with sun bright yellow flowers, it’s hard to miss even when you’re not looking for them. A little confused, I turned and started walking back home. I suddenly realized I’d been walking with the metal scissors in my hand out in front of me. I immediately knew this was an ‘offensive’ mistake to the Spirit of St. John’s, and in wildcrafting protocol (not to mention safety). I put the scissors away and prayed for forgiveness from St. John’s. As I resumed my search, I once again held the healing intentions in my mind. I walked with the spirit of all those I have helped with this miraculous plant, including myself. I had just start to walk back and right there off to the left of the path was a huge patch, that had completely alluded me only moments before. My focus had been in the wrong place, just focused on “taking” my harvest and not thankfulness and the need for healing. When I saw the huge patch that seemed to have just appeared, it took my breath away. I knelt and prayed because I was given, yet again, the gift of seeing how powerful my herbal allies are. St. John’s Wort is akin to the spirits of the land and truly embodies the procreative spirit of the Earth and the Sun.

Our most distant ancestors used St. John’s Wort to heal wounds, both internal and external. Without Him we would not be here now! Our debt to this humble plant who has traveled here with us from distant Eurasian lands is most well paid by giving Him homage, and by not cutting Him down with the long grass on lawns, fields and hedgerows where He grows wild. If you are going to learn about one plant, let it be St. John’s. Learn how to court this one, He is the first Healer.