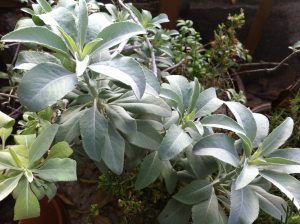 On this last day of March, I was out in the freezing dawn, and even though everything still appeared like winter I could smell Her (spring) coming. As the sun and temperature climbed through the morning and the ice began to break down and melt, the winter birds exuberantly sang-in the long-awaited change. I too began to feel and see her. And like when we first glimpse our love, after a long separation, I felt something frozen in my heart crack open and I too began to melt and sing for Her.

Now, I’ve come in for lunch break from pruning fruit trees and collecting
sap all morning. It’s thirty degrees Celsius in the tropical greenhouse that’s attached to our old log house. The air is moist and verdant with the sweet edge of hundreds of blooming citrus flowers. There is also a Guava and Passion Fruit flowering. The sound of leaves dancing and water falling fills the tropical air.  Our bed of winter “greens” is just finishing up and our long-season seeds and garden starts are just coming on. This time of year the greenhouse heats and humidifies the house, and saturates it with the spring smell of the flowering Earth, who we are so longing for. In the greenhouse, spring starts at the beginning of February with deep red Cinnamon shoots, the time of Chinese and Mayan new year. This little paradise not only feeds us and heats us it also keeps the kids and me sane, and off of airplane’s, during the long winter. 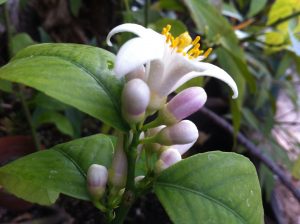 I think many of us maple syrup-makers were startin’ to wonder if we put the taps in backwards or somethin’. Maybe a few of us even began to wonder if She was going to come at all this year. In my thirty years of tapping trees here in Central Ontario, the sap has never flowed even close to this late in the season. The old-timers say they remember springs in the fifties, and sixties when the sap didn’t flow until April. They say that when it finally flowed the sap was good in those years. But really, there’s nothing like waiting and maybe even thinking something is lost to generate deep appreciation and  thankfulness for Her when She does come.

The dramatic shifts and extremes of weather are messages from the Earth to “wake up and look around”. And I don’t mean this in some “new age” way. I mean it’s in the design of things that she is able to communicate with us, just like we can with all of our relations. We just have to look around and listen. In our daily life we often just see what we want to. For most of us it’s only when we are shifted from our habits and routines do we pay attention to our environment. This happened this winter when city folks lost electrical power for a few days and is happening again now this spring, as Maple Syrup makers in the country wait with bated breath for Her flow. She’s shifting all of us from our slumber to make us think and look around. People have always understood the Earth is sentient. We have only forgotten this since the age of science. But even science now, as it deepens its understanding of how complex, precise and effective nature is, is beginning to see that the Earth is sentient.

While many are still caught in a simplified mechanistic view of evolution, those at the cutting edge are starting to see a fluidity of genome never imagined. While it was thought changes took millions of years, through random means and “survival of the fittest”, the catalyst for these small generational changes was not understood. Now, a little stiff and untrusting, researchers are starting to see levels of responsiveness that threaten the atheist “objective” view of reality. From the homeostasis of the planetary weather, down to the atomic structures, we are starting to understand the miracle She is, in a new way. For the first time in centuries, when science shows us how the Earth works in detail it doesn’t diminish Her magic as it once did, but only deepens our reverence of Her and takes us to the threshold of a bigger truth.

This bigger truth is described in the creation myths of many cultures. It’s tempting to read these myths a fanciful stories or as symbolic. But over time, as my own thinking has become more animistic, recognizing Her sentience, I have come to see and understand these myths are based on careful observation, gathered over many generations just like scientific descriptions. Only the ancients had a vastly different methodology and set of signifiers for describing the world. Their  view was no less precise or physical. Instead of focusing on the temporal side of surface phenomena, they focused on the inner, timeless dimension of reality. In this hopeless time, just as we are teetering on edge of ecological destruction, this gives me hope that these two truths are finally meeting. It reminds me of the Hopi prophecy, that say’s something like this – when the younger brother (Europeans) return to turtle island they will bring back a missing piece of an ancient map of reality. And that when this piece is placed back into the Hopi picture the world can be made whole again.

May we all move forward as the foretold “rainbow warriors”, helping to change our cultures destructive path, one small act at a time.