I was harvesting Nettle all morning and many hours later my hands are still vibrating, numb and tingling like stars in the frozen night sky. In meeting Nettle we have come across a witty sharp-tongued Prince with a generous purse. He’s ambitious but in a very grounded sustainable way, slowly expanding territory as he gains a solid footing. Nettle will bring your body and the land richness if you work with him. But he will also keep you in line, demanding you always keep your wits about you. Nettle is a very old companion to those of us from the ‘old world’. One who we should all keep close. He has saved us countless times from famine and kept us strong and in good health over millennia. 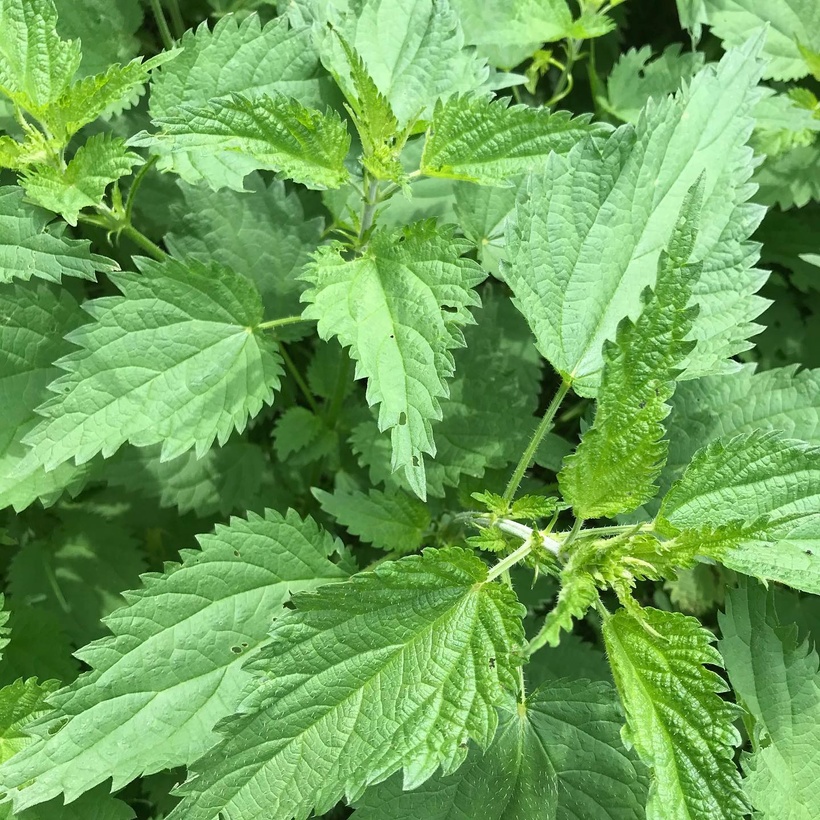 From first thing in the spring we start harvesting shoots of Nettle for food. He is a very rich and productive food. Sometimes we are given three harvests in a year! To nurture such abundance we harvest just the top three leaf sets at one time, and not all leaves all the way down. This way the stocks are thin and tender enough to eat and he’ll be able to quickly recover making multiple new branching shoots, that can be harvested the next round. Eventually, he says “back off” by going to seed. One of our patches is not harvested for food and left for the ‘medicinal harvest’. This patch is only harvested once. From these plants we make tea and tincture. As tea, Nettle loses much of its anti-inflammatory qualities but keeps other medicinal virtues and is incredibly nutritious. The spirits in tincture catch and bring out Nettle’s more ethereal analgesic qualities. It’s important not to harvest Nettle too soon in the season for medicine, before he’s at his fullest and most biting, which comes with the first dry heat of the season. His medicine substantially increases in the first month or so before going to flower. For medicine I ideally harvest Nettle during the waxing moon toward the end of May. Once the subtle light green flower shoots become visible, coming from the leaf’s axis’ along the main stem then the harvest time has passed. At this point it’s not just that Nettle isn’t as good quality, but that it is said to be hard on our liver. In the summer and fall we can still use the roots for medicine making, which, while containing little formic acid, seems to have many of the same properties as the aerial parts. Later in the summer when the seeds are ripe I make very strong kidney/adrenal tincture. If you have bigger patches you can also harvest the seeds as grain, that can be ground up and used to make nutritious porridge or for bread.

Medicinally, Nettle can be used internally or as a poultice. He is very effective and transformative in conditions of cool, rot and decay such as with poor circulation or digestion. Nettle is also well known to be able to resolve infections, abscesses and stagnation. We can see this medicine on the land too, because Nettle can grow in perfect health directly in sewage or other nasty anaerobic environments. By contrast Nettle is also of great use in dry hot afflictions. His scathing nature can give our ailments a taste of their own medicine. Treating like with like can cancel out the body’s heat and inflammatory conditions. Arthritis, pains, strains and burns can all benefit from Nettle topically. This may be because inside the Prince’s biting facade, he has an inner cool (almost mucilaginous cacti-like quality) that helps heal exhausted and burnt conditions. Sore throat, inflamed breathing passage, Pleurisy, Pneumonia, ulceration and poor digestion are greatly aided or healed by Nettles soothing and expectorant qualities. If harvested before flowering Nettle is also non-toxic, so like many common herbs it can be taken by anyone, young or old, sick or healthy all year round. 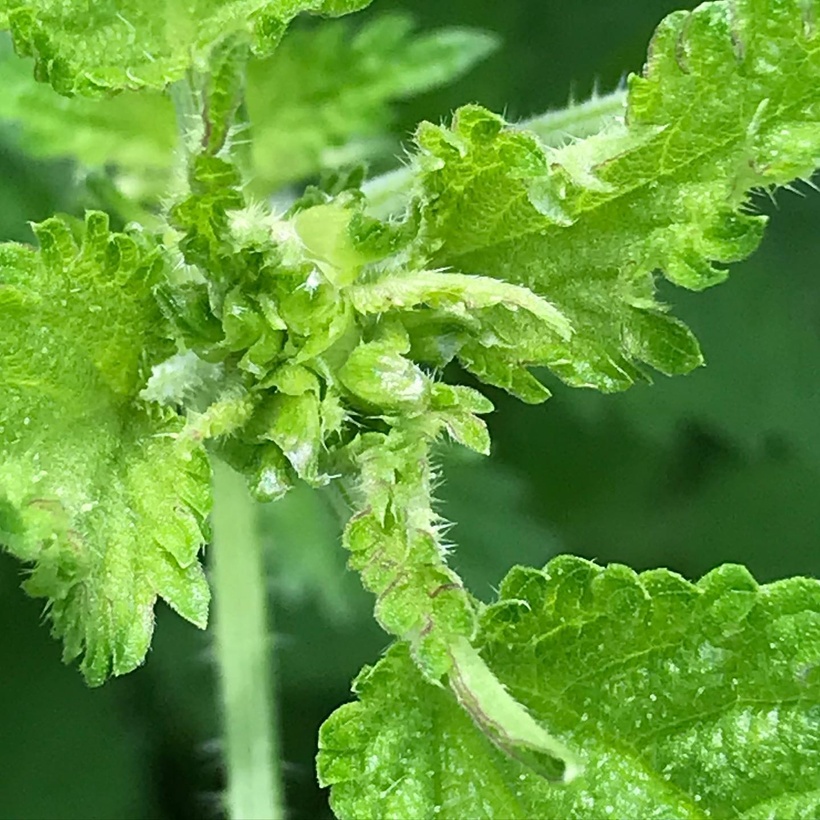 One of the most common traditional practices of using Nettle to heal was accomplished through urtication, whipping the afflicted area with the ‘green’ plants to get a good dose of formic acid into your bloodstream. Yes, there is the sting, but as it dissipates the increased circulation and deeper healing anti-inflammatory properties can take away the pain of arthritis and sore joints. If you have any doubts about this effect being psychosomatic I have a brief story about a friend who had a Bull Mastiff dog that might convince you otherwise. By the time I met them the poor old dog kinda hobbled around because he had such terrible arthritis in his bowed front legs. My friend knew the traditional Nettle remedy of urtication and so he whipped the dogs front legs. Initially the dog tried to run away, but after a short time he figured it out – that his mobility and ease greatly increased after the whipping. So then, when his master was close to the Nettle patch he would actually come and lean on his leg as though to say “proceed with the treatment”.

Nettles teachings are many. Sometimes as we rush through our lives we’re moving so fast there is a delay before we take in an elder’s sharp observation or comment. When we do, just like after running through nettle, suddenly a painful self realization rakes over us. What have we done?. Nettle, like our elder admonishes us to slow down and act consciously. And he backs up the axiom with a venom that we self administer through our carelessness. In life our unconscious trespasses are sometimes made clear like this, because after the fact we feel the bite of our karma and conscience. As nettle protects and heals the land, so too is he of great use with bruised and inflammatory conditions of our emotional being. While Nettle is ambitious and fast growing he teaches us restraint and like a martial arts master, to move slowly outward from our grounded footing. He also teaches us more overtly, to look and enjoy the lush fecundity of life without just grabbing for it.

Nettle develops our body’s capacity and the capacity of the Earth for fertility and production. It is an old German horticultural remedy to plant nettle around unproductive or barren fruit trees and bushes. This ability of nettle to increase richness relates not just to the incredible nutritional value of Nettle (more protein than any other plant) but as well to his prebiotic qualities which aid with our capacity to digest and absorb nutrients. Nettle is also extremely high in absorbable forms of iron and other trace minerals, so nettle can cure anemia and deficiency related ailments. His surprising yellow roots speak to his hidden iron as well as viper-like character. His roots, like yellow snakes reveal his cleansing and transformative nature.

Historically, Nettle is very interesting and holds an important place for many traditional people from Asia, the Middle East and Europe. Surprisingly the history isn’t so much about eating the plant, (as he was just one of many ‘pot herbs’ that people could pick for food), but rather for use in making ropes, fishing nets and clothing. In this regard Nettle stands as perhaps one of the most durable fibres, (along with hemp) that there is. To use it in this form Nettle is harvested after seeding, and then the stripped stalks are ripped into long fibres. These were then further refined by washing away the woody bits and then were spun into threads of all sizes. 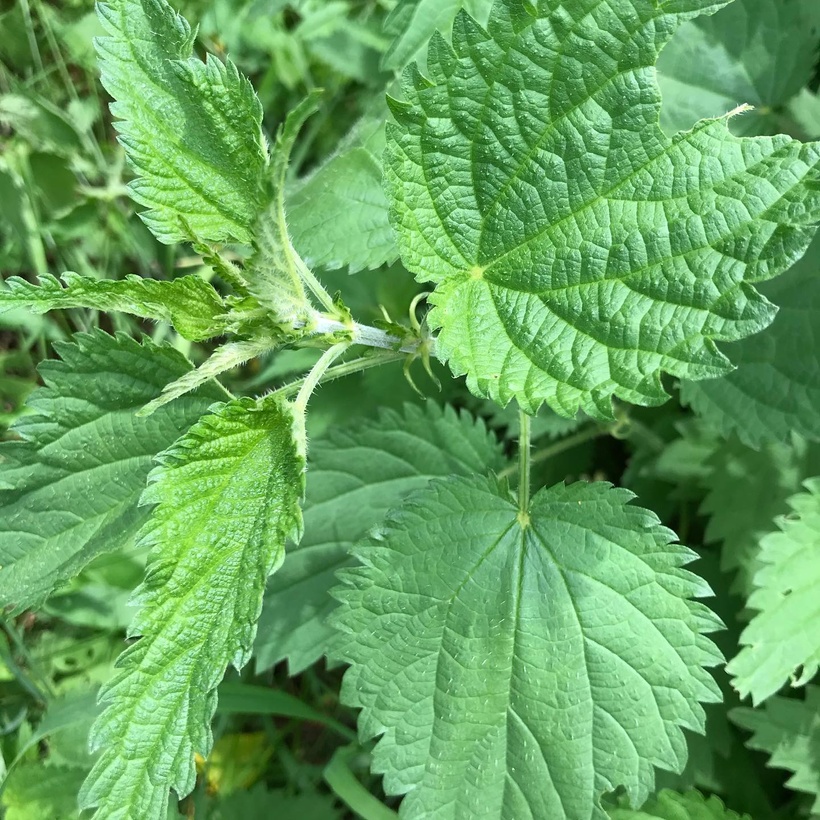 It’s also worth noting that Nettle seems particularly associated with what we now call Aryan culture. One of the earliest examples of Nettle fabric came to us with one of the earliest finds of white skinned, red or fair haired people. The site is well over two thousand years old, found on the steppes of Northern China. These Aryan people came down from the North, after the climatic optimum eight thousand years ago into Indian and the Middle East as well. And from there to the Mediterranean and eventually into Central Europe and the areas we associate with Aryan culture. Germans have always loved Nettle and this ‘white’ heritage and the ancient connection to Nettle was not lost on Hitler. When embargoes cut the Germans off from any source of cotton during the second world war they generated an industry that made cloth for army uniforms from the common weed Nettle. Not surprisingly many of these uniforms are still in very good shape, whereas all the allied forces cotton uniforms are long gone. It’s unfortunate that most people associate the Aryan race with Hitler and white supremacy. If you look into it you find Aryan culture, like all the ancient cultures, has holy roots extending back thousands of years back into the hardpan of prehistoric times.

On a less ominous note, I do think Nettle is kind of a totem plant of the Colonial European cultures that we ‘white’ people came from. Nettle is a wanderer, on the land, as the Aryan race has been. Historically, Nettle has always been our companion. Nettle moves into an area with agriculture and domestic animals. It’s part and parcel of colonization. Initially it arrives quite humbly and not as a conquer, in the animal dung or hay. And then as the land is broken and transformed into a domestic production systems Nettle thrives along side, in the ‘unused’ and ‘waste’ places. In one sense he is filling a vacuum created by the die off of the indigenous cultures. And in his way Nettle does utilize and make the broken land productive.

In this light it’s not surprising that First Nations people traditionally have very little to do with Nettle. Both medicinally or in terms of culinary use there are few documented uses. It was not part of their story because in precolonial times they did not have domestic animals. Matthew Wood says that many Natives of North America saw Nettle as being born of the trickster, with his apparent richness but hidden bite. This also rings painfully true to the Indigenous relationship with European colonial culture.

Maybe the last word on or for Nettle is that in this day and age, with looming ill health and food shortages, we all really need to honour and host this old one. With today’s factory clean farms and the easy use of ‘Round-Up’, good patches of Nettle, that was perhaps one of the most common plants around are now becoming fairly rare. Unlike say Burdock or Dandelion who can easily spread their seed and live almost anywhere, Nettle doesn’t have many ways to move out and find new territory. He need free animals and manure piles. He needs a reasonably rich spot to even just grow, let alone thrive. In one way, having a patch of Nettle is like money well invested. If you don’t diminish the capital by over harvesting or cutting it back too much you will keep getting rich dividends well into the future. But keeping a patch of Nettle, unlike most investments, results in not only our capital growing, but so too does the wealth of the land!