We’re in the midst of building a timber frame and she’s a lovely thing to watch come together. Mark, a timber framer and sawer who is a student here at the Sacred Gardener school has taken on the project in trade for tuition. He’s from these parts, knows where the pines were cut, and milled them into custom timbers himself. On each hand-picked piece he laid out the cuts, tenons and mortise’s.

We cut and chiseled the wood out over a week or two and I slowly adopted an intolerance for wavering lines and eighth inch discrepancies. In fact even the shrinkage of the beams was accounted for. The outside shrinks more than the core of these tree sized beams, so the tops of the posts that hold up the cross beams, were all chiseled slightly concave toward the centre of the timber, so that in the future when it’s all dry, no gap will form and the load will be carried evenly on the outside and inside of the pole.

When the day came for the raising, the nine posts of the building were ceremoniously placed in the eight directions and centre. As soon as the first eastern pole was in place, a huge blue Dragonfly landed on it, blessing our building with vision and connectivity. When the first bent was in place a host of Ravens playfully swung by, nodding our way with hoots. You could feel the old ones smiling back at us from the other side. 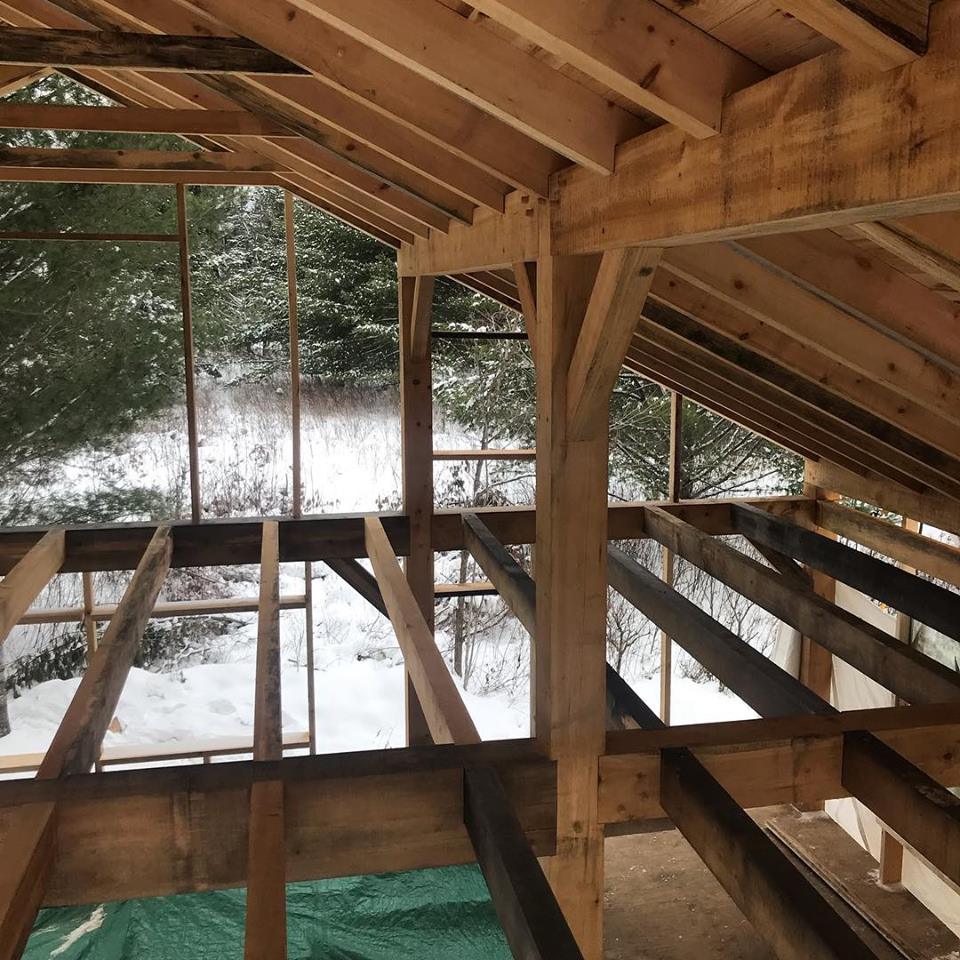 The second floor joists were placed across, joining the three-poled ‘bent’, making what’s known as a ‘bay’. All these old words hold many meanings. Bay is a ‘coastal harbour that gives us shelter for settlement’, bent means ‘an arc of grass’, which likely provided the original inspiration, if not materials, for that architectural gift from the dreamtime.

Unlike the slow and somewhat plodding way of many alternative or old school buildings such as earthships, cob, stack-wall or even log buildings, (all of which slowly spiral up from the earth in an organic way), timberframes rise! Mysteriously and suddenly the squared poles are standing and the precise architecture of the whole structure becomes fully manifest in a day.

You might not notice it but everyone’s eyes always turn toward a pole. Poles are powerful beings. Our ancestors who lived by their body knowledge, the way many now live by their cellphone, were very aware of this innate dynamic of a pole as was clear in their use of Totem or Clan poles. A pole is not just a ‘tall stick’, it contains a more profound meaning of ‘axis’ and ‘centre’. Because of their stature, their presence is immediately felt by all the spirits of the place where they are raised. There’s some kind of innate holiness to their perfect vertical forms that is so simple and elemental it’s hard to name or explain. It’s like the trees wake up, as they rise from their horizontal beds after dreaming their new form. When our structural poles went up I felt their spirits awaken back into the trees they were only a few months before in the forest. They were intentionally placed with the right end up like they grew for all those years. The carefully placed cross beams, and angled braces become their branches. The word ‘beam’ actually means ‘light from a tree’.  As the whole frame comes together these old tall ones begin to sing as a forest, once again. 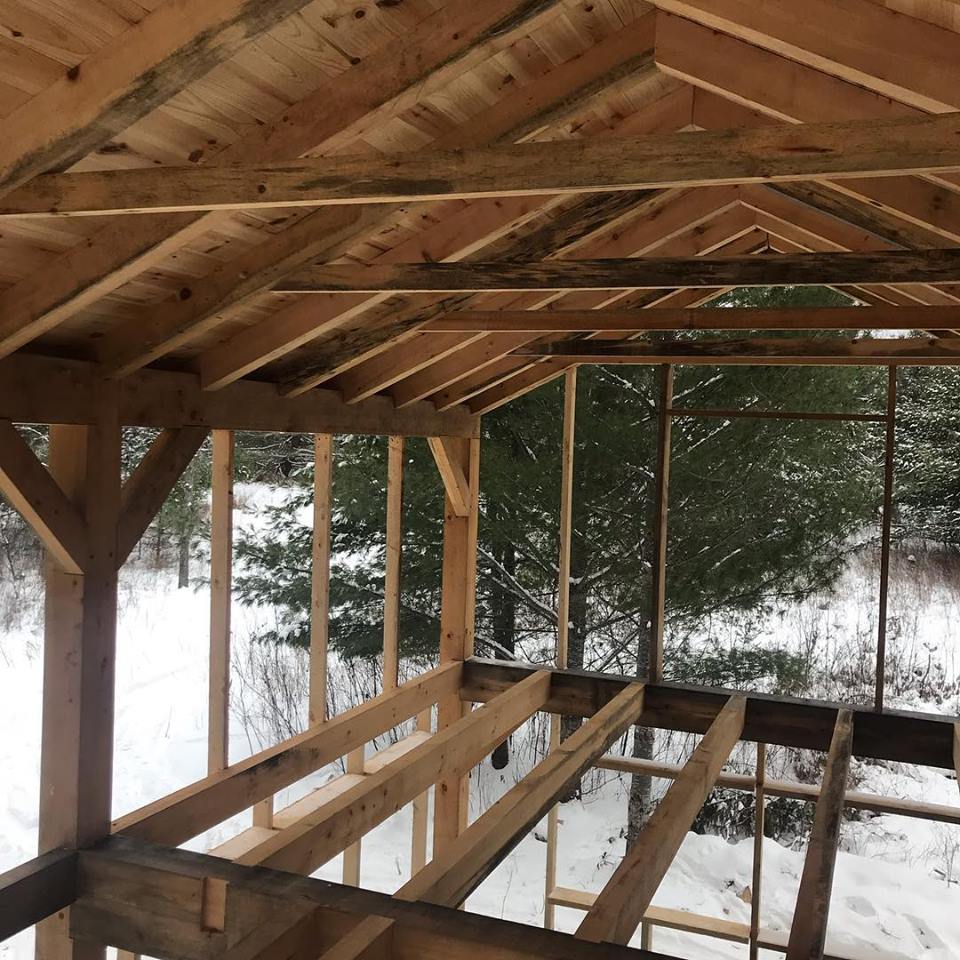 This holiness was once felt by all who raised timber frames and as an acknowledgement of it, when the highest point was raised up against the sky an Oak bough was placed atop of it. Different cultures used different trees but the ceremonies around this seem to be remarkably similar from all over the world. This ‘wetting’ ceremony was performed to the sky herself, the thunder beings, the surround trees and forest spirits so they were not offended by the rashness of the erection. It wasn’t a celebration of conquest as it seems to be understood now. It was a bowing down and gesture of humility. As though to say to the Earth, even at our boldest, She is still at the centre and holds the highest place to us.

This ceremony and others blessing the foundation and walls weren’t done because of some superstition as we imagine now. But were and are employed out of what might be called indigenous science, long tested and trued before being written into tradition. When a building has not been born in a good way it can have host malevolent spirits or when the land the building is on has been offended, many calamities can and will befall the building and its inhabitants. Lighting, fire, bugs and flood are not random or “God’s will”. They are a direct result of not realizing the world is alive, not moving forward with care and not acknowledging with gratitude and thankfulness what we have taken.

Now, instead of being blessed with good fortune by giving the living world its due, we over-build, insulate our buildings from the ground, and get insurance. But insurance has never saved one person or building to my knowledge. And the price for going this route is heavy in economic terms and energetically. When we are energetically separated from the earth by insulation and materials like rubber and plastic then our buildings and by extension are bodies are not grounded. These days people sell machines and magnetic products by the millions to make up for this grounding that we get naturally when we’re not insulated from the Earth by our shoes, cars and buildings. Both the hundred and fifty year old log cabin, my family and I live in, and the new timber frame have their foundation on bedrock. So when our feet touch the boards of the floor our whole body takes on the healing frequency of the Earth. These things are so simple but we’ve literally short circuited our healing system by adopting “efficient and safe” industrial technology. Electricity and cell phones amount many other technologies create electrical imbalance in our system so it’s more important now than ever to be grounded.

I think when the building is ‘bare bones’ and everything is open, her magic shows the most. As the bones are fleshed out, acquiring roofs and walls, that spaciousness of the forest closes in. This cocooning, not necessary in southern climes, is a necessity for those of us who live in the north. And truly, to be able to do this cocooning with natural elements from the local land (wood and straw slip insulation in this case) is a huge honour these days. A rare honour that should not just be a basic human right, but a right of passage into the response-ability of adulthood.

The alchemy of the ancients are held in the design of these old buildings. Their forms hold the runes of our days. That magic is what brought these structures to be alive in the first place and what can sustain them for centuries. One of these magical gifts is the mortise and tenon. The word mortise (which are the slots or holes the tenons are placed in to hold the building together without screws or nails), comes from the Greek Mert or murt, which means ‘to die’. This root of the word is still seen in words like mortuary. Interestingly, to the Greeks the same word also meant to be eaten. To me that shows that these folks a few thousand years ago clearly comprehended, that to die and to be eaten were that same thing. In many ‘early’ cultures the understanding that everything must eat to live and in turn will be eaten, and that death feeds life, was central to their ways. A widespread and ancient image of this understanding is represented by a serpent eating its tail. By contrast in modern western culture we actually surround our bodies in a coffin, often with a metal layer and then inside a concrete vault with the explicit intention to not be eaten. I think folks imagine they are preserving themselves for the ‘second coming’. But I wonder, might not their physical body’s release and decomposition into the earth be central to their spiritual redemption? Isn’t giving our bodies back to the Earth our token for reentry to the big game?

Ok, just to back up a bit, the mortise is a hole that holds the tenon. Tenon is also still represented in modern speech in the word tendon. This word also means obligation. The ancient wisdom of these words held that Tendons and familial obligations bridge everything, holding our limbs, as well as disparate parts our life and our culture together. It was also understood that the mortise and tenon profoundly embodies deeper truths of the masculine and feminine principles. This shows the understanding of these essential energies, many of us now ironically know as Yin and Yang, was also once well rooted in western culture. While this sacred and profound understanding of reality is all but lost, I’m told there are remnants of it in the old world languages. Innuendos about “pushing or shoving the tenon in”. And when a ‘peg’ sticks out of the beam it’s still humerously referred to as ’proud’. I suppose it’s typical that the only remnants left of a profound understanding of this sacred union, on which the architecture of our life is based, exists as profane puns. In this cosmology the masculine tenon is the active principle that joins the ‘materials/matter/mother’ together at the centre of creation. And out of this union, new life, a third thing that is more than the two is born.

Building your own structures is as I have tried to convey, is its own right of passage back to ancestral connection and the embodied wisdom of ages.