I originally made Rosemary Gladstar‘s (I adore her, and making her recipes makes me feel like she’s in my home) recipe, ‘The Queen of Hungary’s Water’s‘. I loved the combination of herbs in her recipe, and loved the effect of the apple cider vinegar that they are infused in, but found it unavoidable to end up with stinging eyes (I ended up using the vinegar in salad dressing recipes!). For my second round, I purchased distilled witch hazel from New Directions Aromatics (recommended by Sigrid Naturals, my cream-making mentor), which I was very pleased to find, as I wanted a witch hazel that had no alcohol in it (some witch hazel is made by infusing the witch hazel in alcohol, rather than distilling it which can be quite drying to the skin). 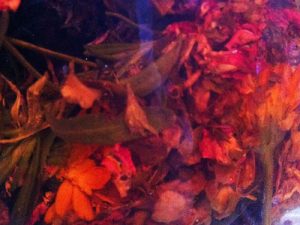 I modified the recipe, adding a few astringent and emollient herbs from our gardens and fields and here’s what i ended up with:

Some of the herbs were fresh and some were dried when I made the toner, you can use either.

I then poured the witch hazel distillate over top in a gallon jar. Initially, because some of the herbs were dry, they floated on top. After the witch hazel soaked in, the herbs started to sink, but I needed to give some of ones on top a poke to make sure they were below the surface. Anything sticking out above the surface runs the risk of going moldy, which of course we don’t want.

I left it in the root cellar (otherwise known as our basement), for six weeks, and then strained it out through cheesecloth. I then squeezed out the cheesecloth with the herbs in it to get the last bits of my now finished toner out. There is always a lot of liquid left in the herbs.

I rinsed out the jar, and put the strained toner back in the jar, and some in spray bottles to use, and to share. I added in a bit of lavender and rose essential oil to finish it up. It leaves my skin feeling fresh and well fed, and is especially lovely as a cooling spray in the summer heat. The smell of the summer flowers warms my being!

Esoteric Mythology of Western Agriculture and Thou

After about five years the creek and pond silted b

I moved to the farm at Golden Lake, now home of th

White sage harvest, from plants we grow in our gre

Tomorrow evening at 8pm EST, Steven will be speaki

Esoteric Mythology of Western Agriculture and Thou

After about five years the creek and pond silted b

I moved to the farm at Golden Lake, now home of th