The first time I remember using my intuition to heal with herbs was thirty-three years ago when I was about 17. 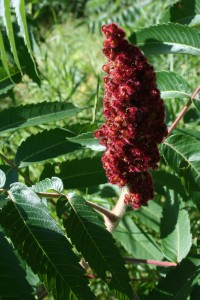 We were at my family cottage in Muskoka and my mum had a severe sore throat. I went out for a walk and found myself sitting on a stone ridge in the forest, absent-mindedly looking down on a thicket of Staghorn Sumac and thinking about my mom’s sore throat. At some point I became conscious that the trees were presenting themselves to me to heal my mum. I knew about Sumac lemonade but knew nothing else about how the plant could be used. I went down to where the trees were to thank them and snapped off a few branches. Then I walked home and looked up how to use Sumac medicinally. To my amazement Sumac was a known cure for sore throats, working much like Slippery Elm, a more well known herbal remedy. An overnight cold infusion of the Staghorns inner bark, was to be used for gargling and tea 3 times daily. My mum took the preparation and by the end of one day her throat was better.

This was my introduction into the real art of healing, though it took many years of practice, of working the intuitive muscle, and successful healings of the worst illnesses like Cancer, Influenza, Pneumonia and Lyme, before I felt confident in this ancient way. It took me those many years to deeply accept something that is totally natural because we are all led to believe that only someone with a degree and with a methodology of rational diagnosis can be a legitimate healer. But now that I’m on the other end of this learning curve I can clearly see this ancient way is in many ways the more legitimate and innate way to heal, and the allopathic methodology often leaves “legitimate” doctors shooting in the dark.

At our core, we are all healers and nurturers. How could it be any other way? Or else how would we have survived to be here? There is a wide held belief that the “primitive” or “reptilian” brain lay at the core of our being. We cling to this belief because this somehow justifies our violent and selfish ways. But this is a fallacy. While I would not deny the physical facts, I think the interpretation of the facts is filled with our “civilized” projections. Reptiles, like every other living thing have a form of intelligence, which while not like ours is every bit as evolved. And while their feelings might not be like ours, many reptiles are nurturing; raising and protecting their young much like mammals. Many reptiles are also great hunters. And at the heart of hunting is the ability to intuit and empathize with your prey. So by looking closer we see at the heart of all animate life not a cold competitive killer but rather the ability to love, nurture and empathize.

Many of us are selfish and competitive, not because it is somehow “human nature” but because we are the survivors of, in many cases, thousands of years of conquest and war. The sadness from the endless generations of suffering has hardened our hearts to the truth that cooperation and not competition is at the heart of life.

We still live in what mythic scholars would call the Warrior-King culture. This patriarchal culture views traits of empathy and nurturance, which are the basis of healing, as “feminine”. Again, I would not argue with the surface appearance of this, but with the interpretation and ignorance that denies we are all feminine at our core. This truth is signified by many things in nature not the least of which is our DNA. The basis of all human molecular structure is female. Also during our first period of embryonic development we are all female. We all start from a female egg and our born from a female body.

All of this is to say that everybody has the innate ability heal. Healing can come in many ways, but in almost all cases the intuition and empathetic ability of the healer plays a key role. This is true whether we are taking about bodywork, herbalism or emotional-spiritual counseling.

In a life well lived our intuitive and empathetic muscles are exercised; raising children, making a good living, working with illness and with the pain of watching loved ones die. In this environment emotional healing comes purely through intuition from a very young age. We intuitively know and understand in a deep way when someone needs a loving look, word or hug. In a more natural existence, where we intimately know and work with the land and plants around us, we would also have exercised our intuitive muscles by choosing wild plants for food and plants to heal our people.

While we can’t be taught intuition, like a muscle it gets stronger with use. There are also ways of intentionally exercising it, as we do in the Intuitive Healing course at the farm. Many of us did not grow up in an environment where intuition was fostered. But for most of human existence we grew up in a traditional culture surrounded by people who were intuitive, and so it would come more easily to us. In our ancestral cultures we would feel completely comfortable using this part of ourselves and it would be praised and encouraged. But in our culture that part of our self is completely ignored by our “learning institutions” and generally thought of feminine, superstitious and insignificant. The irony is that while the school of modern allopathic medicine would say that all their procedures are based on well-researched, rational theories, any doctor worth his salt would admit that their intuition which is not mentioned in their training, is also key in doing healing work.

When trying to explain what intuition is I equate it with right brain activity. To put it in modern terms I’ve said intuition is like a computer that can scan all its information in a flash and come up with an answer, relative to our rational left brain that slowly thinks step by step, researching only the most obviously relevant topic areas one at a time.

While intuitive healing may seem far out to many people, if we open our eyes and look at the big picture we see animals use plants to heal themselves and our human ancestors practiced this type of healing for hundreds of thousands of years, long before the era of rationalism and science.

We were out walking on the pond, near dusk. Fina

We are grateful for such beautiful people that com

SEEDING A FUTURE OF BEAUTY, FECUNDITY AND HEALING